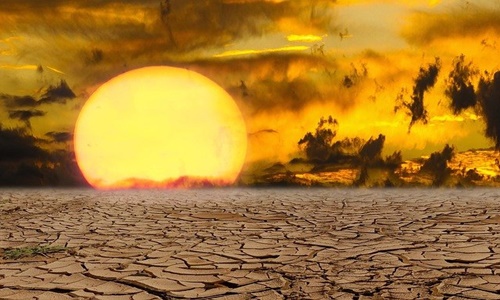 Temperatures in parts of Pakistan and India have reportedly hit record highs, as the consequences of the climate crisis extends across the subcontinent, risking millions of lives.

As per the Indian Meteorological Department (IMD), in April, the mean daily temperature in central and northwestern India was the highest since the records started over 122 years ago, touching 35.9° C and 37.78° C (96.62° F and 100° F degrees) respectively.

The heat wave has forced school closures, destroyed crops, and put a lot of stress on the energy supply in certain regions, as authorities recommended people to stay indoors and stay hydrated.

As per data shared with CNN by Pakistan's Meteorological Department (PMD), the cities of Sibi and Jacobabad in the nation's southeastern Sindh region, registered highs of 47° C (116.6° F). This was the hottest temperature ever registered in any region in the Northern Hemisphere on that day.

Meanwhile, the IMD predicts that temperatures in India will improve moderately this week, with the highest temperatures throughout northwest India falling by 3° C to 4° C (5.4° F to 7.2° F). Later this week, temperatures in Pakistan are forecast to be closer to the average, at around 40° C (104° F).

However, researchers predict that the climate crisis would result in more frequent and intense heat waves, impacting over a billion individuals in both nations.

As per the Intergovernmental Panel on Climate Change (IPCC), India is among the nation’s that are most prone to be impacted by the oncoming climate catastrophe.

According to Gurvinder Singh, Punjab's director of agriculture, wheat yields were lowered by an average rise of approximately 7° C (12.6° F) in April.

The Heat-fueled electricity consumption has also caused an acute coal shortfall in certain parts of India, resulting in millions without electricity for up to nine hours every day.